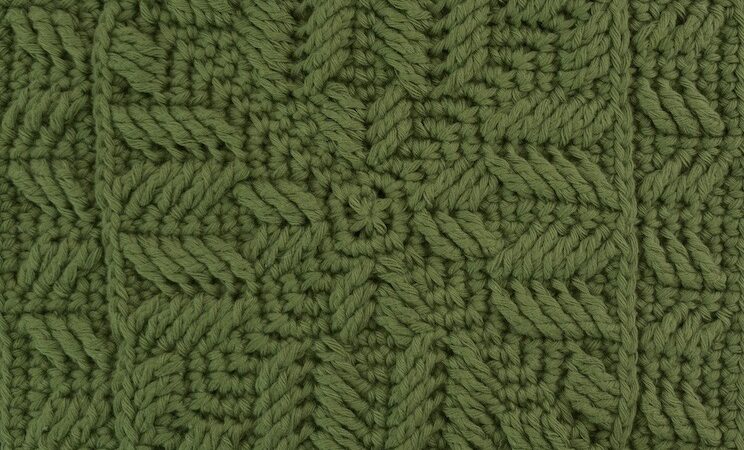 Even later, after Ian lost his leg, they continue to stand and walk with Ian to Jamie’s right, having their strong hands on the outside and their weaker sides shielded by their friend.

It is so funny while almost inducing tears to read how Jenny explains to Claire about Ian’s and Jamie’s habit to always cover their friend’s weak side. It is only a small remark, but one that not only demonstrates the deep friendship between the two comrades, but also the depth of Diana Gabaldon’s writing.

My aim was to demonstrate the side-by-side effect in and through the pattern. The left mirrors the right, again and again, whether they are close together, as in the first few rounds or further apart like they are on the outside of the square. Just like Ian and Jamie, it is not about the distance, but about the relationship, the connection, the understanding and the matter of course.

I wanted to show a friendship that starts small and grows big and deep, from childhood in Scotland to wild years in France to being brothers-in-law, brothers in arms and brothers by heart.

While you crochet or if you look at the pattern closely, you will notice that from the inside towards the outside the two sides drift apart by one stitch in three stages. In the beginning (square center) trebles ahead and behind use the same front loop, while at the next pattern change each have their own front loop. In the last third of the square there is even a stitch between them.

This is supposed to portrait that each of the men are living their live physically further apart, starting as children in the same neighbourhood, Ian living with Janet in Scotland and Jamie fleeing with Claire to France later on and in the end Ian spending his days still in Scotland, while Jamie and Claire build their new life in America.

Yet whenever they they meet, they are still guarding each other’s weaker side and being as close as the brothers none of them have (anymore). It is a testament to the deep friendship between those two men, who are not only kin through marriage but also bonded through their kind, strong and loyal hearts.

In the Storyteller Blanket colourway this square is dark green in reference to a friendship that grows strong and starts as well as ends in the green fields around Lallybroch.

this square was frist called Side By Side, but then I renamed it to Guarding His Right, as that seemed more appropriate and more…well, right.

The link to this pattern, photo and video tutorial is here:

See all squares from Season 1 at a glance