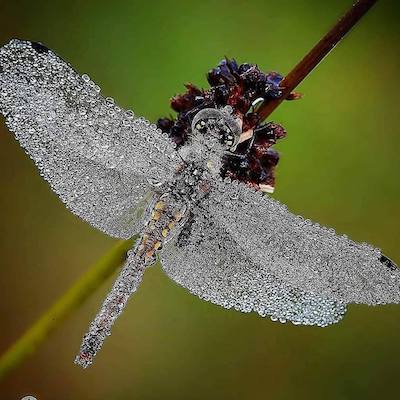 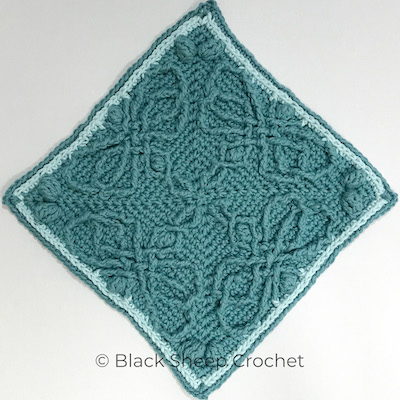 The Dragonfly square is about perpetual change in stillness.

I’ve always loved dragonflies; they felt like they were creatures from a fairytale. Whenever I’d meet one, the time would stop. They seem to be still in the air even though they have to make an enormous effort to accomplish this impression.

They have that in common with Claire: from the moment she left Jaime at the stones just before Culloden, she had to make an effort to live, to go on, which seemed so hard.

Like the memories that were kept in the amber Claire and Jaime were given as a wedding gift with a dragonfly trapped inside it, Claire was forced to live in a time she didn’t choose.

As I see it, the Dragonfly is a reminder of the contrast Claire represents:
constant internal palpitation and turmoil while seeming to be perfectly calm on the outside and adjusted to the life, be it ‘now’ in the 18th or ‘back’ in 20th century, in Scotland or in America.

The square design itself is inspired by the intertwined lines of Jamie’s and Claire’s destinies as well as by the Celtic knot visuals.

The feature of a Celtic design is that is often is created by one single, closed line going over and under itself creating a knotted kind of look.

Dragonfly is an almost symmetrical design with a lot of curves. In order to make them round and smooth, I had to find a way to mirror the roundness from the first half in the second half of the design.

When I think of a design, I always draw a picture of it first. the next step is to try to transfer that picture into stitches in the image layer of the square.

Front post stitches are great to create the optical illusion of a continuous stitch, but they often work better in one direction than they do in the other. So I was looking for a way to manage a nice and balanced curve on both sides of the design.

The classic position of the hook didn’t give the option to make truly mirrored round shapes. through trial and error I noticed that inserting the hook from the left instead of the right (I am a right-handed crocheter) seemed to solve the problem.

This is how the “stitches from the opposite site” were ‘invented’. 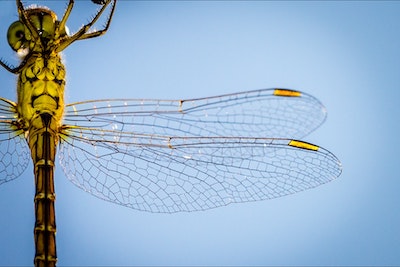 Photo by Jack Kaminski on Unsplash

Petra's Thoughts on the Background

When I first saw the Dragonfly square, I was blown away by the design. It was pretty obvious that a Dragonfly would have to have its own square in the Wrapped in Jamie CAL saga some time, although I had in mind to hold it off until a later Season add-on once the CAL would be finished.

Nevertheless, I think it could not be more perfect timing and Veronika’s square has inspired me to use an initial idea to create a border just for her square, as I had done for a few of mine and it was the spark that initiated the idea to give EACH square a special border.

This was a first test with a rather flat and open head, which I quite like. However, to match Veronika’s design better, I have adapted the head to make it rounder.

I am aware that Dragonflies are carnivores and therefore actually have no relation to or need for flowers, but since they often use them for landing, I added a rose and some rose buds nevertheless. 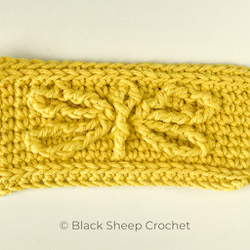 The pattern for this ‘add-on’ square border will be available end of January 2022. 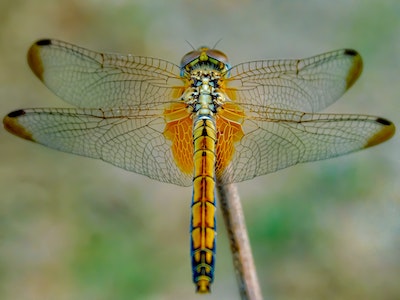 Photo by Jude Infantini on Unsplash

I have seen some pretty awesome makes from my patterns, which people call challenging and are classified as at least intermediate but probably rather advanced level crochet. I believe that Veronika has topped this with her beautiful design.

It is very impressive how Veronika has not only grasped the Image Overlay terminology so easily, but how she has definitely mastered the terminology and put her own stamp on it. While I love seeing my designs being made, it is like an incredible proud mama moment to see a maker turn into a designer.

The use of stitches from the opposite side is simply a genius move and I have adapted the patterns I had written to include this technique.

Vernika has contributed a lot of thoughts and fantastic suggestions to the Image Overlay Crochet terminology ‘Petranese’ Guide, which we together updated for Season 2 and onwards. This guide is part of each pattern purchase. Parts from the guide are available as stand-alone tutorials here on the website.

I am deeply indebted to Veronika for her contribution to the CAL, the IOC Guide and I feel blessed to have found a like-minded sister in craft.

I hope you are as smitten with this design as I am.

Now that you know the background story to Wrapped in Jamie Season 2 Square 21 – Dragonfly, maybe you are inspired to give this square a go. I am curious to see which colours you are going to use or combine and which square border you are going to add.

How about the classic square border from Season 1?

You could add Veronika Gadulova’s border contribution – her Plants and Herbs Border.

Each of them are free on the website or available for purchase as ad-free PDF booklets including photo tutorials and charts in the shop.

Alternatively, you could add a border specifically designed to match the theme of this square: the Dragonfly Square Border. (available January 2022)

The Dragonfly Square Border is available as a single pattern or as part of the Wrapped in Jamie Season 2 Square Border Bundle 1 in January 2022.

Subscribe to our Flock News to be notified as soon as they become available. 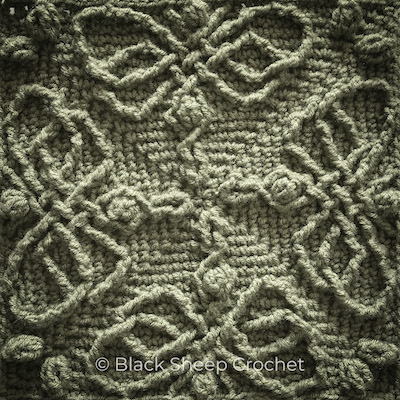 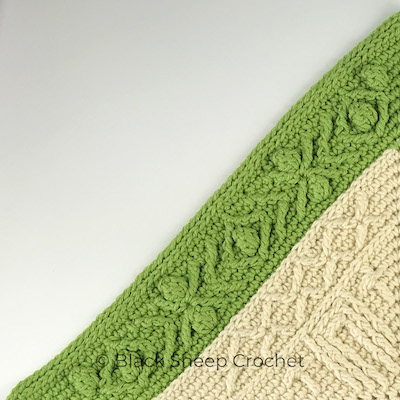 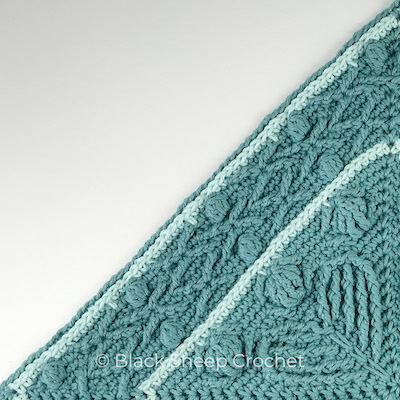 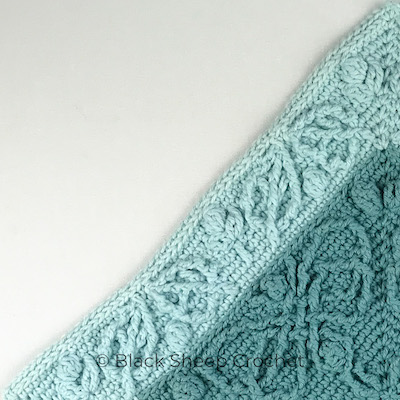 You can find the free Dragonfly pattern page here:

Alternatively, support your designer and get the ad-free PDF version including added resources like

Next Pattern:
Square 21 – Spruce
not yet released 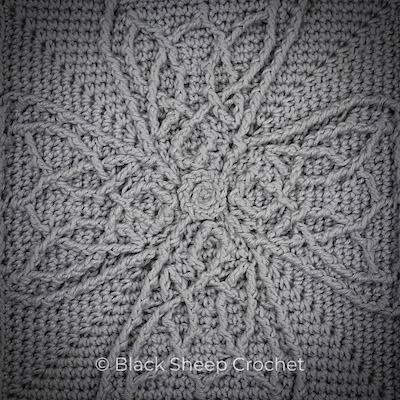 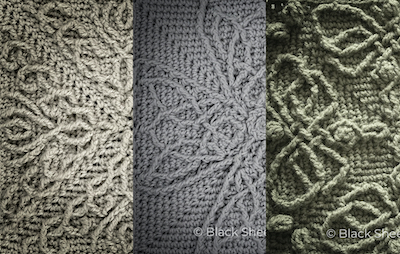 The discounted Wrapped in Jamie Pattern Bundle, including