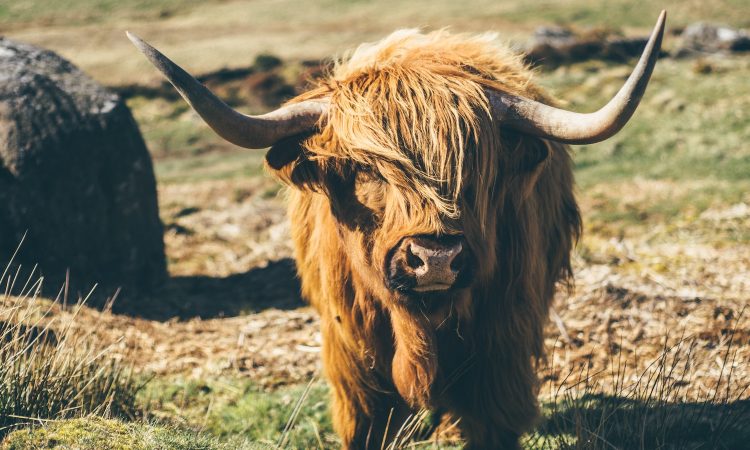 The inspiration to this square was born from a comment that came from Mr. Willoughby, when he calculated James Alexander Malcolm Mac Kenzie Fraser’s birth – 1st of May 1721 – to have happened in “the Year of the Ox” according to the Chinese Zodiac.

It just so happens, that this corresponds to also be Taurus in the traditional Zodia system.

Add to this the image of those beautiful Highland Cattle with their long horns who are so typical for Scotland’s Highlands that they spark almost instant recognition and violà, the idea was born.

I chose the natural colour for the “story-telling” colourway blanket in reference to the  beautiful wooly cattle bulls (and cows) with their long horns that are so typical for Scotland’s Highlands.

The colour represents innocence and potential, a new life pale and fresh coming into the world, whether a human being under the star of Taurus or a little calf who couldn’t care less for neither the Chinese nor Western Zodiac systems.

I was considering whether or not I should really try to catch the form of a bull’s head, as it is such an obvious and “in-the-face” way to state the obvious, but then I thought “Why not?” and I must admit that as the first square, I really like how it turned out.

Most of all, I love the triple meaning behind the symbol and that it tells so many stories in just one square.

The inside square ‘border’ contains three super-simplified versions of the ox heads (without the horns), symbolising the herd of more Highland Cattle in the background .

The link to the pattern, photo and video tutorials can be found here:

Wrapped In Jamie Square 1 – Year of The Ox Pattern