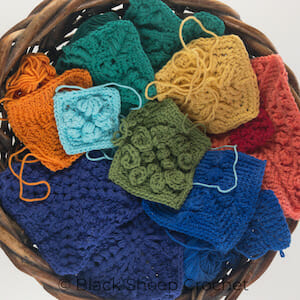 Image Overlay Documents and Masterclasses for Makers and Designers

Many of the Black Sheep Crochet projects, for example all Wrapped in Jamie squares, many Heirloom squares and some Afghan squares, are designed in so-called ‘Image Overlay Crochet’ (IOC) technique.

What on earth is Image Overlay Crochet or IOC or ‘Petranese’?

You can find a detailed description about the differences between Traditional overlay crochet and Image Overlay Crochet as well as the ‘Petranese’ terminology here.

When I started to write down the patterns for the Wrapped in Jamie CAL designs, there was no existing easy system that I knew of to describe the positioning of these kinds of overlay stitches. I have therefore created a special way of abbreviating the special stitches, using the familiar abbreviations along with mathematical symbols and numbers to make the descriptions shorter.

One of my Facebook Wrapped in Jamie CAL clan members invented the term ‘Petranese’ for this specific Image Overlay Crochet terminology and it was quickly adopted by everyone. It became a commonly known description for the system, so I kept the name in order to distinguish that this is my specific style of writing IOC terminology. However, the aim is to use this system globally, which is why the official reference will be “IOC” terminology.

At first glance, IOC may look complicated but it really is not.

You will most likely already know most of the stitches used and I will explain how to read the IOC abbreviations in the documents below. Once you get used to the abbreviations, you will find them easy to read and to follow, giving you a lot of information that otherwise would have to be described in a lengthy and wordy manner. I hope you find this system as useful as thousands of users so far.

Getting started with IOC

Think of IOC is a kind of shorthand for the crochet community, just like the commonly known crochet abbreviations (sc, dc, tr…), only a slight bit more ‘complete’.

The added extra information that makes IOC more complete has evolved from the necessity of stitch placement descriptions and information on how to work certain special stitches used in Image Overlay Crochet, which go beyond the commonly known and required terms and their abbreviations used in other crochet forms.

While there are not exactly new crochet stitches in Image Overlay Crochet, the ones most people are already familiar with are regularly used with different intentions and results in comparison to a more traditional crochet style. Just like Mosaic or Filet crochet has had a come back and is recognised as a specific crochet style, Image Overlay Crochet has some features that justify for it to be classified as its own category.

Even though I am claiming the copyright to the pattern writing style (abbreviations, visuals, chart symbols), my wish is for the IOC terminology to be used widely (and wildly). To make it easier for makers and designers alike while maintaining a common and unified style, I am making the resources available to the whole crochet community.

With that in mind I have created the Image Overlay Crochet ‘Petranese’ terminology explained documents for makers as outlined below.

Our aim using the IOC terminology is to keep it ‘simple‘, unified and easy to translate into other languages. The less we need to replace in the description, the easier the terminology can be used in translations.

In order to maintain the integrity of the IOC system, we would like to ensure a standard (in engineering we would call this ‘norms’) for using the terminology, just like the standards provided by the Craft Yarn Council for crochet and knitting. Therefore we offer the documents explaining the basics, together stitches, anchoring, charting, and visuals to everyone for free.

In this document we will lay the foundation for making or designing IOC patterns:  Image Overlay Crochet (IOC) Terminology / ‘Petranese’. Born out of the need to make stitch placement descriptions easy to read, a new way of terminology has evolved.

We will have a look at

You will have an advantage if you are an experienced crocheter. However, the tutorials and the instructions as well as extra resources are written to allow even an adventurous beginner to make an IOC design.

2 - Together Stitches and Anchoring

Together Stitches are very often the ‘bread and butter’ in a design. The way they are anchored also plays a vital role in the process of ‘writing stories in yarn’. In this document we cover

This document is all about the chart:

These visuals are to IOC what shorthand is to writing.

When working with repetitions, visuals

They have become a much appreciated tool among IOC pattern makers. In this document you will learn how to read visuals and how to use them to read the pattern and, consequently, crochet rounds faster.

Thanks to these documents, you can rest assured that as a crocheter of a pattern by an official IOC designer,  once you have familiarised yourself with the terminology, you

When you purchase or download a free IOC pattern, it will contain links to video tutorials of the most common and the most unusual or potentially challenging special stitches and techniques.

You also receive an invitation to attend a workshop by an experienced IOC designer (via Zoom or similar applications – starting with the release of Season 2 of the Wrapped in Jamie CAL; release date tba) that guides you through all the basics of IOC terminology where you also have the opportunity to ask further questions for clarification if required.

As our IOC community grows, these resources will be available in several languages, starting with English, Czech and German.

Going Beyond the Basics

We find, however, that for designers, testers, editors and charters or those who are simply interested in the methodology and want to dive deeper, an extra layer of depth is required to take full advantage of what IOC has to offer.

The following documents are designed to support those who want to take their skills further. They are supporting documents for and available as part of the corresponding Masterclasses only.

The way stitches are worked differently in comparison to traditional crochet styles is what makes Image Overlay Crochet so unique. In this document we

Once you have explored the possibilities of using simple stitches in your design, you are ready to move on to more adventurous creations, should you choose to do so.

In this document we explore

Masterclasses will be offered for the same topics as outlined in the respective documents with the bonus of additional information and resources, including

The number of participants in Masterclasses is limited to ensure the efficiency and quality of the training can be maintained, therefore registration is required.

In the Masterclass we go over the same topic as in the document, but you will have the opportunity to ask specific questions about stitches that you find challenging.

We will practise the topics of the documents live and you will receive an exclusive swatch pattern to practise what you learned.

2 - Together Stitches and Anchoring Masterclass

The way stitches are worked differently in comparison to traditional crochet styles is what makes Image Overlay Crochet so unique. In this document we

Once you have explored the possibilities of using simple stitches in your design, you are ready to move on to more adventurous creations, should you choose to do so.

In Workshop 6 we will be

Workshop 7 is where you get to play full out. We explore

At Mastery level, you have

Level Up - Becoming an IOC Tester, Editor, Charter or Designer

If any of the above applies to you, you bring the perfect pre-requisite to become a founding member of IOC community where testers, editors, charters and designer come together to support and look out for each other to enrich the crochet world with beautiful and intricate patterns that are well written to tell the story of a special person, movie or book character in yarn.

Please join our special Facebook group Image Overlay Crochet (IOC) Designers and Makers Community if you want to be kept updated about new workshops and masterclasses for IOC.

The aim of Black Sheep Crochet in regards to Image Overlay Crochet is to have a universal system so that it can be integrated into the crochet world where makers or designers only need to learn it once and where translations can be made easy.

As a Tester, Editor, Charter of Designer of IOC patterns, you are invited to become an IOC contributor.

This means new stitches or specific IOC-relevant techniques that you come up with and that you want to add to the library will be included with credits given to you.

To go a step further, you could become an official collaborator.

Benefits of being an official collaborator include:

*If a translation in your language already exists, you are invited to connect with your fellow designer and/or to connect with designers using the same mother tongue to enable dialogue.

So this is the current plan in regards to the documents, masterclasses, contributor and collaborator options.

What are your thoughts? How would you like to be involved in Image Overlay Crochet? Send me a message or leave a comment in the facebook group.

I look forward to connecting with you in a class or maybe even face-to-face.