Home - Blog - CAL - Behind the Scenes and a Preview 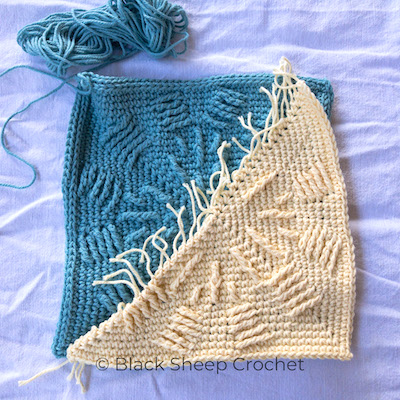 I get asked a few times every week when the new patterns will be released. I am so grateful for the interest in Season 2 of our Wrapped in Jamie CAL and really honoured that so many people have joined me on this journey. It has been a bumpy ride at times, but I would not miss it for the world.

In honour of your patience and hopefully as an explanation why I can not yet give a definite date for the release of the pattern book, I thought I give you a little preview of one of the squares from Season 2 and a glance at my design process.

Many of you have expressed their preference of a complete Season 2 book over a drip release. Both options have their pros and cons. With the changes in terminology once in Season 1 and other ‘life-got-in-the-way’ situations, the drip release provided huge learning curve opportunities and we would not be where we are now with the patterns had it not been for the challenges we experienced as a Clan with this CAL.

So for Season 2, we are opting for the ‘complete’ release, as most of you are used to and would expect from a CAL and what the majority asked for. This means we are preparing all 12 (!!!) other squares for this part and at the time they are ready to be released, you will have the option to buy the e-book with all patterns in one go OR choose only the patterns you like as they come out each week.

I will be talking more about how this is all going to work when we are closer to the release date.

In the meantime, let’s talk about what is involved in getting there.

First, I give the designs a common theme. Season 2 of the Wrapped in Jamie CAL is all about Scotland, Jamie’s home turf, and the setting of Book 1 of the Outlander saga.

Next, I come up with ideas for the squares. In this case, I pondered things that are ‘typical’ for Scotland and came up with floral elements:

Moving from flora to fauna, ‘The Stag‘ is one of the most common and iconic animals associated with Scotland, where it can be found almost everywhere. It is certainly significant for some elements in the story and therefore a must-have pattern element.

The ‘Unicorn’, Scotland’s national animal did get some consideration, but was dismissed for the Moment, as was ‘Nessie’, even though there are design drafts for both of them.

Considering the topic of the book, ‘Stone Circles‘ was an obvious choice, as well as the place where it all starts – the Scottish ‘Highlands‘ with their beautiful landscape.

Because they are similar to a normal cross yet so typically different and instantly recognisable, ‘Scottish Cross‘ was a symbol that was definitely worthy to be included. And when we talk about symbolism, we must not dismiss the Scots’ ‘Celtic Roots‘ ornaments of which can still be found everywhere from household objects to furniture to clothes and craft designs.

‘Claire’ is supposed to be the square in the middle and is going to be as big as four normal squares including the border. That gives me 14 square sizes.

My magic number is usually a dozen or multiples of 12, which matches the number of squares in Season 1.

With four definite parts/square sizes for ‘Claire’ square, I currently have 14 options, so two need to be sorted out. Analysing the current ideas for their ‘adaptability’ to take a role in the design and how they can best be ‘translated into a pattern’ will help me to decide which squares should go into the ‘to be re-considered another day’-file.

After some contemplation, these will be Unicorn and Nessie.

We will talk in detail about the specific design process in Masterclass 7 – IOC Mastery.

Let me make this story a bit shorter by summoning it up: 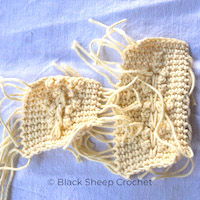 After the designed is pencilled on the template, I try a few elements to see how the stitches work together. I take the width of the element, add a few stitches on each side and start to crochet it. I do it in ‘partial mosaic style’, meaning that I cut the yarn at the end of each row.

Once I am happy with the result, I try the elements in conjunction, making one complete side – again in ‘partial mosaic style’. 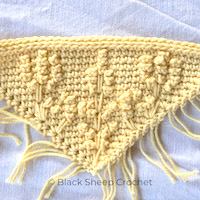 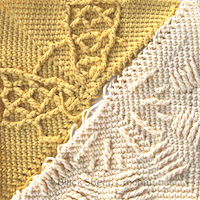 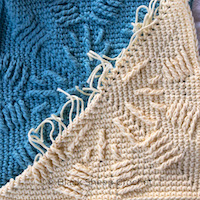 When stitches on the next side are involved, I have to work at least two of the four triangles a square consists of.

Shown here is a trial version of ‘Celtic Roots’ (dark yellow) which already has been re-designed as result of the test and ‘Stone Circles’ (light yellow).

I was quite happy with the Stone Circles, even in the 4-sided version, which has only slightly changed from the sample. Mind you, the sample is already a fourth try…

From here, it is a matter of following the same process for every design: 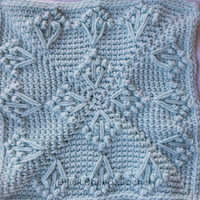 A first version that I quite liked, but it did not really show the specific quality of the heather plants. 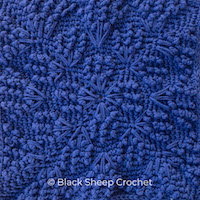 In version 2 I was happy with the portrayal of the heather qualities, but it seemed very busy. 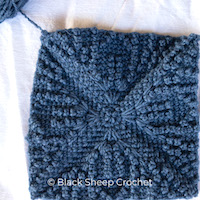 Version 3 did not even make it to the end, because it was just too boring.

In version 4 I felt that I was getting somewhere, but not quite there yet.

From here I go back from the document to the chart. I negotiate with hubby to create the chart and the chart legend symbols digitally. I then test the pattern again from the chart and compare to the written pattern and symbols.

If there is a mistake or if I have a change of mind – which happens when I accidentally crochet a stitch in a different way that turns out to look better than what I first planned – the document has to be adjusted again.

At this stage, I am usually over the pattern ;-).

I also know the pattern so well, that I can’t see the wood for the trees and it is very difficult to spot any mistakes, because my brain automatically fills out any blancs just looking at the visuals or the chart and even the written pattern.

I therefore get the document edited by someone who is skilled in this task, lately by the incredible Paulina S. Maraboli. Thank you so much Paulina!

After Paulina has found a hundred mistakes in the formatting or inconsistencies in the pattern writing or missing/wrong visuals and they have been corrected, I can then – finally transfer the stitch descriptions to the chart legend and get started with the photo and video tutorials.

The same process as above applies to these, so that I am really ready for a new design by the time a pattern is ready to be released.

I will spare you the details of getting a pattern ready to be released on Ravelry or my own website as I am already exhausted from just writing this down. There are a few more squares to repeat this for, so I better get on with it.

If you are still with me, here is your reward:

A quick glance of what I believe to be the final version of the ‘Heather’ square, with added elements that came up while making the 4-sided test sample. 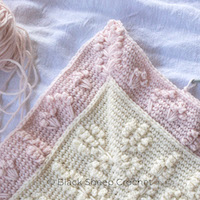 In this photo I am kind of giving away an extra add-on: one of the dozen square borders that come in a pack as an alternative to the square border from Season 1 and the totally awesome square border that our first Wrapped in Jamie collaborator Veronika Gadulova of Tkanee has designed for you. Watch this space for more news about both.

I hope you enjoyed the little preview and the look behind the scenes. If you are not yet familiar with the squares from Season 1 of the Wrapped in Jamie CAL, you can find an overview here:

One final preview: Square 18, Clover, with the one-sided version, the to-be-revised version of the 4-sided square and the provisional test for the special border. 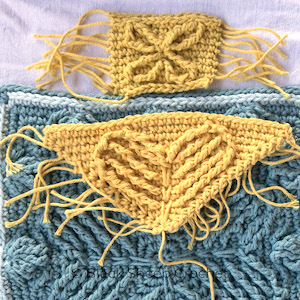